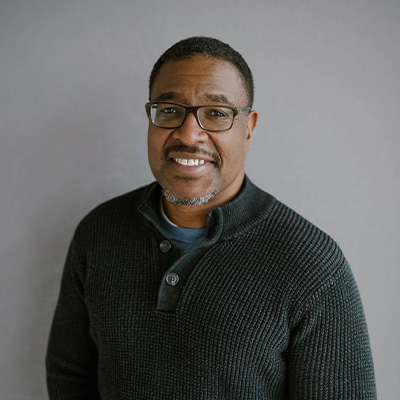 Born and raised in the Buffalo/Amherst area, Leroy grew up in a loving Christian home. His parents are  celebrating 61 years of marriage this December. His still faithful parents raised him and his siblings at  Trinity Baptist Church on Spruce Street. After high school, Leroy went on to Virginia State University  where he received an Engineering Degree. Leroy then spent 20 years in the pharmaceutical industry in  various levels of engineering/engineering management for Bristol Myers-Squibb. After the sale of the  Buffalo division of BMS, Leroy began a career with Contract Pharmaceuticals as their Commercial  Operations Leader and then Product Integration Leader.

In 2001, after re-dedicating his life to Christ, Leroy and his family began attending The Chapel. Soon after  that, God began to use him in ways that only God could orchestrate. Leroy joined the Parking Lot  Ministry and before he knew it, he was also serving on the drama team in Children’s Ministry. Looking  to know more about God, he began leading a small group Bible study in his home. Seeing the  importance of fostering authentic Godly male relationships, he joined, then began leading a men’s small  group. At around that same time, he was asked to join the men’s leadership team.

Fast forward to 2011 and God said, “OK Leroy, time for me to use in you in an entirely new way.” In  2011 Leroy followed God’s prompting – walked away from corporate America – and joined God on  mission as Men’s Ministry, Small Groups Pastor at The Chapel. Shortly thereafter Leroy began leading  teams to Haiti several times a year and now fast forward once again and in September 2014 Leroy  transitioned to the role as the Campus Pastor at The Chapel at Cheektowaga.

Leroy and his wonderful wife of 26 years, Iliana, are the very proud parents of two adult daughters,  Olivea and Vanessa.

Without question, the example my father established in his dedication to: Christ, marriage, raising a  family, serving and education has been the most influential and inspirational thing in my life.